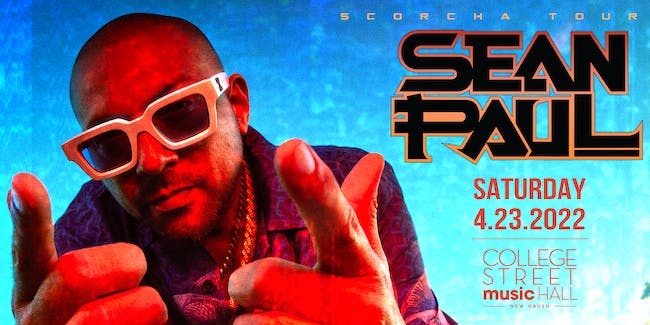 It’s rare for an artist to become the personification of their genre. For just a word or phrase from their mouth to personify the entire artform.

Sean Paul is one of those artists.

Let him say “Dutty yeah” in his commanding voice, and you’ll hear the nuance of dancehall. Across seven studio albums and counting, Sean Paul has taken the genre global, from its origin in clubs in Kingston, Jamaica to the top of the charts, packing some of the biggest venues in more than 120 countries. Only Sean has the distinction of being the first Jamaican to play shows in Kazakhstan and Madagascar.

Born Sean Paul Henriques on January 9, 1973, in Jamaica’s capital, Sean grew up in a sporting family and played on the national water polo team between the ages of 13 and 21. Both of his parents were talented swimmers, and his grandfather competed on the first Jamaican men's national water polo team. But when Sean turned 15, music began competing with sports for his attention.

Initially he wanted to go into production. “My mum got me a little Yamaha keyboard from a flea market,” he recalls. “That started me off on working on riddim (rhythm) tracks, and then it built up to me writing more and more songs.” He remembers that his talents developed across many years, since he was dividing his time among school, athletics, and music.

By the time he was in his twenties all the swimmers he'd been training and competing with had left Jamaica to attend college on scholarships.

“I didn't have that opportunity,” he says. “My grades weren't good, and my mum didn't have the funds at the time to support me.” Instead, he went to university to study hotel management.

Still, he continued honing his music skill at open-mic nights in Kingston, eventually landing a manager who saw his potential. In 1994, he joined the Dutty Cup Crew and released his first solo song Baby Girl two years later. In 1998 he got his first big look outside of the island when he appeared alongside DMX on the muscular Top Shotter, from the soundtrack to the influential cult classic movie Belly.

“People still come up to me and tell me the first time they heard me was on the Belly soundtrack,” he says. “Top Shotter was a big moment for me.”

In 2000 he released his debut album, Stage One, but it was 2002's multi-platinum follow-up, Dutty Rock, that sent his career into the stratosphere. Supported by the five top 15 singles, including the immortal No. 1 smash Get Busy, Dutty Rock went on to win the Grammy for Best Reggae Album and earned Sean a nomination for Best New Artist, the first time a dancehall artist had garnered such a distinction.

His 2006 album The Trinity notched Sean another solo No. 1 hit, with Temperature, a scorching party-starter driven by hammering percussion. Proving that Dutty Rock wasn’t some outlier, The Trinity went platinum, cementing his status as a hitmaker that continues to this day.

Collaboration is key to Sean’s success; he has multiple Hot 100 No. 1 singles with other artists including, “Baby Boy” with Beyonce and “Cheap Thrills,” with Sia. He’s embraced the idea on two of his most recent projects, 2018’s Mad Love: The Prequel, and 2021’s Live N Livin. The former finds him paired with pop stars from around the world, like Dua Lipa and Becky G, while the latter is a celebration of his Jamican heritage and dancehall roots on which Sean trades the lyrics with Buju Banton and Mavado.

He’s also worked with stars in the worlds of Latin music, EDM, and Afropop. In 2014, his relationship with Spanish-speaking audiences spiked after an alignment with Puerto Rican Reggaeton artist Farruko on their single Passion Whine, and global recording sensation Enrique Iglesias who collaborated with Sean for the Bailando remix. The latter peaked at No. 1 in 33 countries and its music video generated over 261 million views on YouTube.

Demonstrating his versatility and good taste, Sean’s summer 2021 release paired him with Ty Dolla $ign for a cheeky ode to sex workers called Only Fanz. In his booming intro Sean sings, “She don’t work but I know she work for that,” setting the tone for this summer bop.

Later 2021 release will find Sean reunited with Sia, making magic with the rising dancehall queen Shenseea, and putting Gwen Stefani back in touch with the reggae sound her band No Doubt was known for.