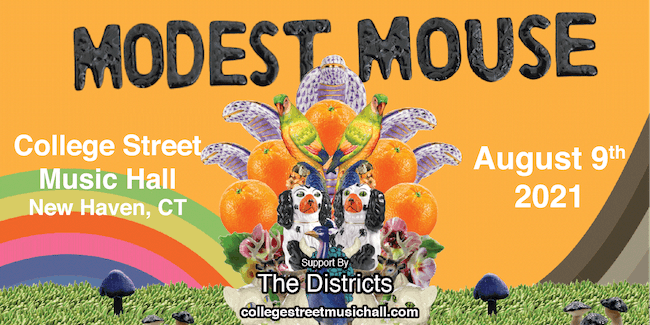 iCal
Google
This event is General Admission Standing Room on the Floor and Reserved Seated in the Balcony.

We've officially sold out of tickets, you can however buy and sell tickets with our official, fan powered ticket exchange.

Modest Mouse was the brainchild of singer, songwriter, and guitarist Brock, whose austere upbringing brought a pronounced fatalism to his lyrics. With bassist Judy and drummer Green, Brock founded Modest Mouse in 1993, the trio rehearsing in a shed near Brock’s mother’s Washington home. The group released its debut album, This Is a Long Drive for Someone With Nothing to Think About, in 1996 on independent label Up Records. The Lonesome Crowded West (1997) earned the attention of major labels, and the band signed with Sony/Epic, releasing The Moon & Antarctica in 2000. The latter album—a sprawling, multilayered work that explored existential subjects such as death, the afterlife, and man’s place in the universe—is considered by many critics to be the band’s artistic peak.

The band’s early work was characterized by swings between slow country-inflected moments and jerky punk rock (often within the same song), with Brock’s bleating, often abrasive vocals serving as a common thread. Later albums saw increasing musical experimentation and a broader instrumental palette. Good News for People Who Love Bad News (2004) adopted more concise song structures and radio-friendly production but was also the group’s most eclectic record to date, featuring accents of psychedelia, jazz, and even dance music. It also proved a commercial breakthrough, selling more than one million copies on the strength of the backhandedly optimistic hit “Float On.” The band’s follow-up We Were Dead Before the Ship Even Sank (2007) debuted at the top of Billboard’s Top 200 albums chart. After a prolonged hiatus, Modest Mouse released Strangers to Ourselves in 2015.

The core membership remained generally consistent, although Green briefly left the band in 2003 and 2004. Over time the group brought in additional musicians, including former Smiths guitarist Johnny Marr for several years. Brock, who had once worked as an artists-and-repertoire (A&R) agent for Seattle label Sub Pop Records, founded his own label in 2005, and he devoted much of his energy to signing and promoting emerging artists.

"You Know I’m Not Going Anywhere is an unachievable promise,” says The Districts bandleader Rob Grote. “It’s about a dream for love to last forever and a yearning to postpone death. It is about wanting to escape everyday life while also craving time with one who’s present. It’s a plea to remain the same in the face of constant change, and the certainty of going nowhere fast.” Written after playing nearly 200 shows over two years in support of their 2017 album, Popular Manipulations, The Districts’ 4th full-length You Know I’m Not Going Anywhere almost never arrived.

Pulling from the propulsive Popular Manipulations, the jagged indie rock of 2015’s A Flourish and a Spoil, and the rootsy vibe of their 2012 debut, Telephone, the band here followed their creative instincts every step of the way, resulting in their most sophisticated and adventurous record to date. “I really just needed to be myself instead of being what someone else thought I should be, whether that was like some masculine bar-band singer or…I don’t know,” Grote says, laughing. “I just want to be myself, and I want to try and do that as best as I can. This record is paradoxically the most-Districts record ever with no intention of ever being one at all. It’s about breaking free from how you’re seen, always being yourself first and holding on to who you are—but also about coming together as a whole and putting your 'self' aside. Doing all that, I’ve realized, ‘Oh, this is how I want to make music from now on!’”