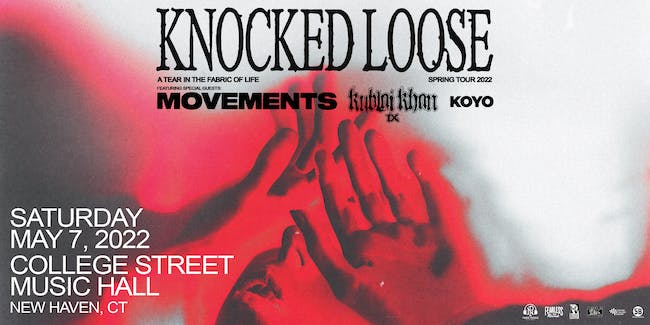 A Tear In The Fabric Of Life Tour

A Tear expands on the narratives hinted at on A Different Shade of Blue, their highly lauded 2019 full-length that cemented them as one of heavy music’s most prominent acts. With quarantine upending their extensive touring schedule — “we’ve kind of been consistently on the road since 2014,” says Garris — the group found themselves in early 2020 sequestered near their hometown of Louisville, in Oldham County, Kentucky. By June, they were hunkered down in a cabin in Pigeon Forge, Tennessee, focused on writing a concept album. By the end of September they had finished recording A Tear in the Fabric of Life.

Musically, the songs were written in order and speak to each other. On the opener, “Where Light Divides the Holler,” ambient sounds of a radio switching give way to a harsh, punishing breakdown. “Permanent,” the closer, is crushing, and ends in a majestic, almost soundtrack-like ring-out. In between there are new elements — guitars droning out, radio interludes, vocal-only suites — and the immediate heaviness listeners have come to expect from Knocked Loose. It’s hardcore, filtered through what Garris says is a more prominent death metal influence. The new sounds the band never tried before have the goal, guitarist Isaac Hale says, of making everything sound “more extreme and more abrasive.”

Which is saying something. Young, but accomplished — along with Garris and Hale, there’s Kevin Otten (bass) and Kevin “Pacsun” Kaine (drums), everyone in their mid to late twenties — the band’s been trading on heaviness for a while. “We’ve written a lot of songs,” says Hale, “and a lot of breakdowns.” Their discography — along with Blue, there’s Laugh Tracks, from 2016, both on Pure Noise, as well as a demo and a handful of singles — is full of them. Every record up to A Tear has been very much hardcore, building off its predecessor, adding some metal and higher emotional stakes. More growth means more heaviness. Says Hale, “nothing gets taken away.”

So too with A Tear, which is a massive progression, but not a departure. The end result feels like a stress test: six songs that speak to each other in a language that’s equal parts Phil Spector and death metal and that balance the tension between technical mastery and catchiness. This is Knocked Loose, distilled, and taking a leap

Reflecting personal changes from a whirlwind five years, Movements realize the full scope of their storytelling, musicianship, and vision on their second full-length album, No Good Left To Give [Fearless Records]. Not only does the music address the emotional push-and-pull of relationships, but it also explores loss, love, mental health, and even intimacy through a prism of newfound clarity soundtracked by post-punk grit, alternative expanse, heartfelt spoken word, expansive rock, and subtle pop ambition. The Southern California quartet—Patrick Miranda [vocals], Ira George [guitar], Spencer York [drums], and Austin Cressey [bass]—quietly worked towards this moment since forming in 2015. Following the 2016 EP Outgrown Things, the group cemented a singular sound on their 2017 full-length debut, Feel Something. Eclipsing 40 million total streams by 2020, it immediately connected by way of “Daylilly” [11.1 million Spotify streams], “Full Circle” [6.1 million Spotify streams], and “Colorblind” [5.5 million Spotify streams]. Along the way, the four-piece received acclaim from Brooklyn Vegan, AXS, Rock Sound, Culture Collide, and more. In between packing shows worldwide, they joined forces with Alzheimer’s Association for the “Deadly Dull” video and covered “Losing My Religion” by R.E.M. for the Songs that Saved My Life compilation. Recorded with longtime producer and frequent collaborator Will Yip [Title Fight, Turnover], they introduce this chapter with spectral and soaring “Ghost” and unassumingly intimate “Skin To Skin,” among other anthems.

Today’s music market is saturated with the same repetitive themes, and bands seem more focused on what will sell rather than what they believe. Metalcore staple Kublai Khan refuses to follow this structure. They use their music to push messages of what they stand for and today’s issues around the nation. They want people to relate to their songs while emitting a sense of hope.