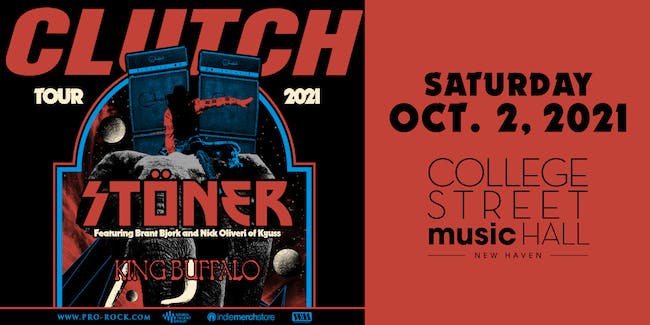 With the release of their highly anticipated 12th studio album, the gloriously titled “Book of Bad Decisions”, it would be easy to suggest that legendary Maryland rockers Clutch have made their finest record to date. This may even be true. You see, the thing about Clutch is that ever since their 1993 debut Transnational Speedway League they've been in the business of writing stone cold classics, and even the most rabid fan would have trouble picking just one. “Book of Bad Decisions” won't make that task any easier. Rest assured, it's another classic.

Recorded over three weeks at Sputnik Studios in Nashville, “Book of Bad Decisions” was produced by four-time Grammy winner Vance Powell (Seasick Steve, The White Stripes, Arctic Monkeys, etc.), a man who apparently knows that a one degree angle change in microphones makes a difference to how an instrument sounds. Interestingly, his name first came to the band's attention via country star Chris Stapleton.

“It started with my brother-in-law, who's a huge Chris Stapleton fan,” says drummer Jean-Paul Gaster. “He and I would listen to The Traveller quite a bit, and one thing that stood out was that it didn't sound like any other country record that I'd heard. Shortly after that I was on Spotify, and a song by The Dead Weather came up. It just blew me away and I could tell that whoever produced that record was doing things a different way. I looked it up and there was Vance Powell's name again, so something was telling us that this is a guy we should reach out to.”

“Even though Chris Stapleton does music that's not too much like our own, the sonics of the record are pretty great,” says frontman Neil Fallon. “He has a very different approach to recording; he comes from the school of live recording and engineering, and the songs, on tape, are not gonna sound that much different from what we do live.”

No stranger to the road, Powell spent three days on tour with the band in order to get a feel for what they do best, watching first from the front of house and then from the stage, checking out the live sound and how Clutch connect with their audience.

“I never go into a record having an idea of how it's gonna sound,” he says. “But after hearing them live, I had an idea of how they could sound. I'm a big live recording fan, so I like when bands play together and I didn't wanna get into that manufacturing a record concept. I wanted it to be real organic.”

Indeed, 'organic' is a word that comes up a lot when talking to Clutch about the new record, Powell taking great care to get guitar tones right and making sure that each song had its own identity.

“Vance is all about vintage guitar sounds,” says guitarist Tim Sult. “I probably had more amplifier options than on any other album we've done. It was like going back to a music store in 1960! This was the first time I've ever recorded with amps from the '50s and I ended up buying a couple of '50s amps while we were in Nashville.”

“I felt really good about the gear that I was bringing into the studio,” concurs bassist Dan Maines, “but Vance had this 1974 Ampeg and I'm so glad that he recommended that. As soon as we plugged it in, it sounded like Sabbath! We ended up using it alongside one of my amps, and I loved it so much that once we were done recording I scoured the ads for another one. What I really like is that each song has a different tone to it, and I think that's Vance Powell's style.”

With each band member contributing riffs to the album – including Jean-Paul who has added mandolin to his repertoire – there was no shortage of material, each song road-tested long before it reached the studio. Hell, with 15 songs, “Book of Bad Decisions” could easily pass as a double album! Always wary of repeating themselves and retreading old ground, there is even – for the first time on a Clutch album – a horn section that swings like James Brown's pants!

“The third night I was watching the band,” says Vance, “they did this song that at that time was called Talkbox, which is now In Walks Barbarella. While Neil was singing, I was thinking to myself, “wow, there's a horn line here!” And while he was singing, I was humming it to myself. I brought it up to them, tenuously, and they were like, “okay, let's do it!” This is as Parliament, Funkadelic as it gets, maybe even a James Brown vibe!”

One thing, however, that is entirely as expected, is that as arguably the greatest rock lyricist of modern times, Fallon, as always, has provided some interesting subject matter, everything from poets to presidents and recipes to rock 'n' roll. You may have to Google some of it, because Fallon is nothing if not a clever bugger, and likes to keep his audience on their toes.

“Most of the time I have no idea what he's talking about,” laughs Jean-Paul, “but the lyrics completely inform how I'm going to play that tune. Whether or not I understand exactly what Neil is singing about is not important. I listen to the way Neil sings those words and I think about what those words mean to me, and that, ultimately, informs how I'm gonna play drums on that song.”

“I think I probably second guess myself into doing that,” says Neil of his lyrical style. “I would rather not be able to answer all the questions, just to keep it interesting for myself. Sometimes a rhyme sounds awesome and I don't know what it means, but I'll go with it anyway. It's become more difficult to write lyrics now that I have Wikipedia at my fingertips, because you can go down rabbit hole after rabbit hole and not get anything done! Not too long ago you'd have to spend months in a public library trying to find out the things you can find in a couple of keystrokes.”

Elsewhere, however, you'll find a more straightforward approach to lyrics, A Good Fire relating the memory of hearing Black Sabbath for the first time – something that everyone can relate to – while Sonic Counselor pays homage to Clutch fans. Indeed, it's fair to say that Clutch fans – collectively known as Gearheads – are a breed like no other.

“I've always loved rock songs that just celebrated rock 'n' roll,” grins Fallon, “but that song was a bit more about the people who come to our shows, that make it as exciting for us as hopefully it is for them. My favorite shows that I've seen bands do is like going to church, especially when everybody's in sync with each other and you walk out with your jaw on the floor. I feel incredibly grateful that people have walked out of our shows and felt the same way. It's a tip of the hat to them.”

“We're exceptionally lucky to have the fans we have,” Jean-Paul agrees. “They're diehard, and because of that, we take this that much more seriously. We do not take this for granted. We know that those folks could be anywhere else, and they've chosen to spend the evening at a Clutch show, so we're gonna do the best we can to provide them with the best musical experience we can. I think that translates to the records, because at the end of the day, all you have is your records. When this whole thing wraps up, those are gonna be the things that go down in history.”

“Rad stays rad. A few ideas are timeless. Stoner is Brant Bjork (guitar/vocals), Nick Oliveri (bass/vocals) and Ryan Gut (drums), and from flowing jams to all-out punker blasts, they know what they’re doing. It ain’t anybody’s first time at the dance, and you don’t call your band Stoner if you’ve never heard the word before. Stoner, however straight-ahead their moniker, encompass varied styles and the songwriting of Bjork and Oliveri – both founders of Kyuss, also Mondo Generator, Ché, Fu Manchu, Bloodcot, and more between them. Atop the classic-style swing and flow from Gut (also of Bjork’s solo band), Stoner keep it casual and wear the name as only those who helped create the sound could. ”

King Buffalo is the trio of vocalist/guitarist Sean McVay, bassist Dan Reynolds, and drummer Scott Donaldson. Since forming in 2013, the self-proclaimed "heavy psych" band has made its name via 4 EPs, 2 Full-lengths, and tours with the likes of The Sword, All Them Witches, and Elder.

King Buffalo’s third full-length record, The Burden of Restlessness, will be released on June 4, 2021. The widely-hailed progressive heavy rock trio will have vinyl & CD preorders available on April 2, via http://kingbuffalo.bigcartel.com.

This the first of three full-lengths they will record throughout 2021.

Their most focused progressive offering to-date, The Burden of Restlessness will self-release throughout North America and see European issue via Stickman Records.

At the same time, it is not mistitled. There are deep undercurrents of frustration and even an aggressive pulse that coincide with the spaciousness for which the band has been so widely lauded since their 2016 debut, Orion. Guitarist/vocalist Sean McVay drops what’s bound to become one of the record’s signature lyrics in opener “Burning” when he declares, “Another year lost in the wasteland,” and more succinct summaries of canceled plans and rescheduled, lost or damaged lives are hard to come by.

“The Burden of Restlessness was written over the course of what most would consider a pretty stark and stressful time period. The end result is our darkest, most aggressive, and most intimate work to date. We are extremely proud of what this record became.” – Sean McVay

Followers of King Buffalo will find the band’s time was not at all wasted. While some of the synthesizer-driven elements of early-2020’s Dead Star EP have been stripped back, the rhythmic complexity in The Burden of Restlessness is yet more new ground the band are claiming as their own. They do so with confidence and a creative depth of atmosphere that comes through in more than just the effects being used, and the urgency in their material is unmistakable.

“Since Covid stopped all touring, we’ve been hard at work and made the commitment to not waste the opportunity. We’re excited to share the first of three records of 2021, which has expanded our sound in a lot of different ways. We hope you enjoy it and we look forward to eventually playing these songs live.” – Scott Donaldson