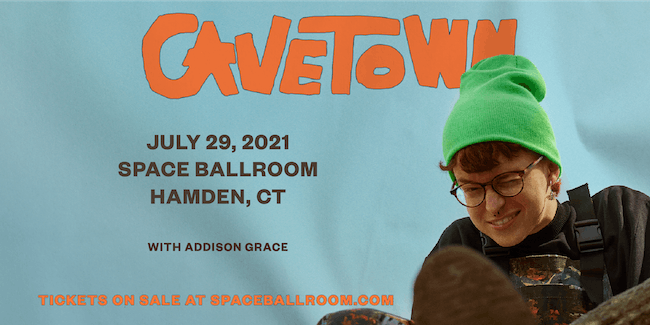 Since the age of 14, Cavetown has created self-produced songs both intensely diaristic and touched with offbeat imagination. Now 22, the Cambridge-based artist otherwise known as Robin Skinner has built a global following based on that outpouring, forging a connection so personal he’s taken to keeping a cupboard full of letters he receives from fans. On his new EP Man’s Best Friend, Cavetown expands on the beautifully detailed bedroom-pop that’s brought him immense success in recent years (including headlining sold-out shows around the world), ultimately arriving at one of his most vulnerable projects yet.

The follow-up to 2020’s Sleepyhead (his Sire Records debut), Man’s Best Friend took shape from a period of enormous change for Cavetown. Prior to releasing Sleepyhead, he’d found himself unmoored by the demands of his growing fame. With the album dropping right as the world went into lockdown, Skinner slipped into what he now refers to as “a very toxic place, mentally speaking,” and eventually stepped back from working on music to focus on his mental health. As he began writing again, what soon emerged was the raw introspection of Man’s Best Friend, a body of work made in deliberate solitude.

Throughout Man’s Best Friend, Cavetown examines everything from hopeless crushes to toxic positivity to unhealthy coping mechanisms. Along with previously released singles like “Let Me Feel Low” ft. Miloe, the EP features four new tracks written, recorded, and mixed entirely by Skinner. On “Idea of Her,” for instance, Cavetown presents an up-close portrait of unrequited love, adorning his confessional lyrics with brightly bubbling effects. The EP’s most upbeat moment, “I Want to Meet Ur Dog!!” centers on the same crush, this time offering up a sweetly warped serenade to her pet. And on “Ur Gonna Wish U Believed Me,” Cavetown sets his self-reflection to a gorgeously sprawling collage of sound. “I wrote that song in the depths of a breakdown during lockdown,” says Skinner. “It’s about being angry at the situation and blaming everyone else, manipulating myself and other people. It came from a dark place, so it felt important to make the music a bit lighthearted.”

Growing up in Cambridge, Skinner first explored his irrepressible creativity as a child. “I used to write these very emotional, dramatic stories about my imaginary friends, then staple the pages together and call it a book,” he recalls. Not long after learning to play guitar, he started writing and self-recording in his bedroom, then sharing his songs on Bandcamp. Soon after delivering his 2018 breakthrough album Lemon Boy, Cavetown landed his deal with Sire and began selling out major venues in the US and UK as well as taking the stage at leading festivals like Lollapalooza and Reading & Leeds. In addition to releasing a steady stream of projects over the years, he’s also ventured into producing artists like mxmtoon, Chloe Moriondo, and Tessa Violet. To date, Cavetown has amassed nearly a billion global streams (steadily streaming at 8 million per week), six million monthly Spotify listeners, and 1.7 million YouTube subscribers.

For Cavetown, one of the greatest triumphs of his music career is the palpable sense of community that permeates each of his live shows. “I’m really grateful that so many sweet people come to see my shows and look after each other and end up making friends,” he says. “I just want everyone to feel safe and comfortable and like they’re surrounded by people who understand them.” And in sharing such unguardedly honest music with the world, the pursuit of that mutual understanding is forever at the forefront of his mind. “The main thing I want to give people is a feeling of comfort,” he says. “So even though it can be scary to talk about certain things, I just have to remember those moments when people have told me that a song of mine has helped them. The idea that my music can help someone else get through a difficult time is always so uplifting to me.”

Creativity radiates from every fiber of Addison Grace’s being. Whether she’s writing her next indie-pop heartbreaker, decorating her bright yellow car with flowers and vines, experimenting with her bubbly, androgynous fashion sense or making goofy jokes about being young and queer, Grace is eager to share the contents of her heart with the world.

The 20-year-old, Utah-based singer/songwriter (who is non-binary and uses all pronouns) was always singing throughout her childhood, and she later learned to play the ukulele after some inspiration from YouTube musicians like Dodie, Conan Gray, Tessa Violet, Cavetown and Chloe Moriondo. In her mid-teens, Grace began covering these artists and writing her own songs, and she shared clips of each on Instagram and YouTube, quickly gaining a loyal following. A few years later, she started a TikTok account, initially just to watch videos and entertain herself, but soon after, she began creating her own content, showcasing many facets of her sunny personality. To her surprise, her TikTok audience exploded, quickly ballooning to over 3.5 million followers, all eager to watch her play a snippet of music, make self-deprecating jokes about her feelings or simply dance freely in her outfit of the day.

Grace was drawn to the music of Dodie and other YouTubers because she also saw herself as a shy, artsy teen, and like many of them, she grappled with questions about her sexuality. After realizing that she was bisexual, Grace found catharsis in sharing her experiences online, as well as in her music. Her first single “Sugar Rush” was about her attraction to a girl who only saw her as a friend, and it explored her fear of being outcast for her sexuality. Another song “Honeysuckle” is a celebration of her self-love journey, which she cleverly shrouded in a third-person narrative. Recent single “Party Killer” is her most visceral and playful track yet, displaying her feelings of inadequacy, while also depicting herself as the murderer at an innocent get-together gone horribly wrong.

Grace’s sound is rooted in sweetly-sung indie-pop, though her sonic palette changes just as often as her clothes, hair and makeup do. With subtle hints of folk, rock and R&B, her songs have a light flutter to them, enlivened by tuneful strums, diary-like lyrics and a youthful, expressive glow. Grace has worked with producers like Robin Skinner (Cavetown, mxmtoon, Chloe Moriondo), Elie Jay Rizk (Mazie, Spill Tab) and Jake Aron (Solange, Grizzly Bear), and she was joined by Pete Robertson (Beabadoobee, Clairo) on her newest single “Manic Pixie Dream Girl” (out on May 7). The upbeat, dynamic song is a repudiation of the common character trope that demotes whimsical, interesting women to mere sidekicks of their boring male partners.

Though Grace creates art as a coping mechanism and a mode of free expression, she also hopes her content helps people understand themselves more intimately, much like other young creatives did for her. No matter if she’s filming herself styling her curled pixie cut or breaking into an angsty acoustic cover of one of her favorite songs, she wants people to feel a moment of comfort or if nothing more, simply take a breath and smile.