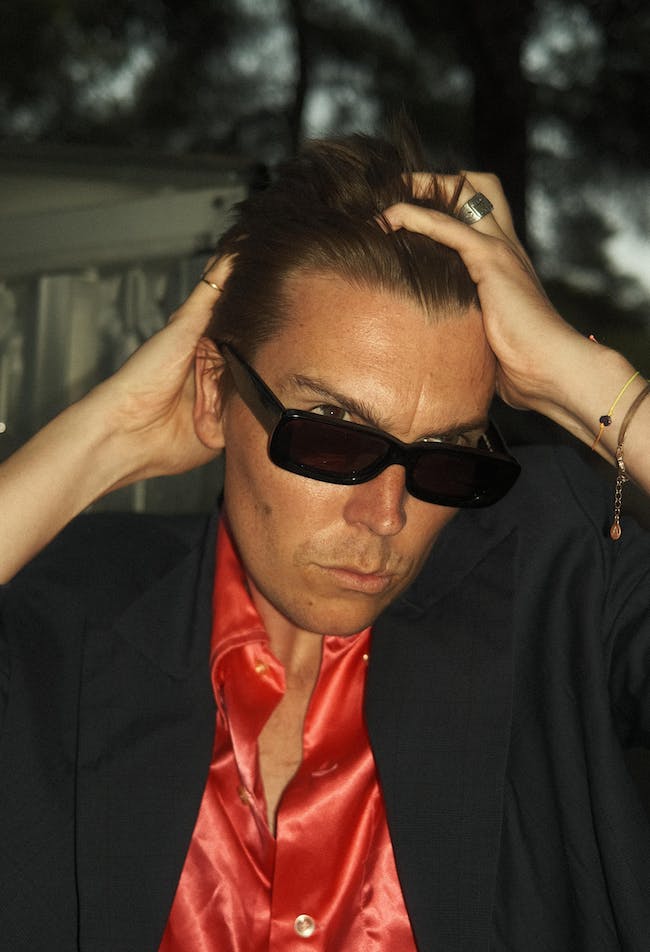 Oxy Music began in the spring of 2020. Alex Cameron was in New York City.

"The only people you saw when you went out were the junkies," he says.

The world, as we used to know it, has ended.

Cameron is in Croatia to make a video. It has been two years since the first lockdown in Wuhan, China, and the tourist town where Cameron is, in Croatia, is effectively closed down all these months on. Nothing doing.

He saw a sign for a "snake show" the other day.

"Yeah, but I was told the snake man went away."

"Sorry. I thought you were making a video."

"Can you hold on a second? I have to...," Cameron disappears from the screen, returns with a pack of squares.

"I tried to quit a few times earlier this year. It didn't take."

"My ability to be a prick and an asshole," Cameron is saying.

The internet connection suddenly is fucking up.

"I'm really sorry," I say. "The internet just fucked up. I missed that."

"No, you're good. It's the connection here, probably."

With New York City locked down Cameron's "ability to be a prick and an asshole "–his words, not mine–no longer had an outlet (other people) and took on an introspective bent.

So began a time of self-reflection. A more self-aware Cameron would emerge on the record. He's reflected on his failures, and on his good luck.

straight for the moat

Oh baby but it's

turns into a boat

"Like a fictional character," is how Cameron says it just now. And who will blame him? Who doesn't value at least a semblance of privacy? What artist cannot do more when given a little distance to move about in?

There has been, of late, some resistance to the idea of separating the art from the artists. Cameron sees this as limiting, and so although we have come to expect the expectations of the artist as a public-facing person and that there will be a good-sized portion of an audience that is unwilling to draw a line between the content and the creator, when you listen to Oxy Music and Cameron sings a line from “K Hole”–e.g. "There's only room for one in a k hole"–maybe the thing is to not immediately assume that it is he, Alex Cameron, who is in that k hole.

Personally, my feeling is that one could go wrong–and quite wrong–reading Cameron superficially. Beneath the pleasant levity of the music, behind the flawless work of his band–a band that can hang with any other band, living or dead–Cameron is deceptively complicated. There are multitudes of irony within him. And then at times he is in earnest. Other times he is ironic in earnest. Cameron is a paradox of paradoxes. Stylish paradoxes. Sincere paradoxes. Defiant paradoxes. It seems the only thing that he is not is the type of lyricist that hasn't put the work in. He is a first-rate lyricist. A poet. Which is all to say, he will be misunderstood.

There is the directness of Cameron's delivery oftentimes. I don't mean blunt or, rather, not blunt in a bad way. It is an artful bluntness, if anything, in as much as it's deliberately so. Alex Cameron reminds me of The Smiths’ way of doing things, wherein the matter-of-fact lyrics that characterized the vocals of singers from the punk scenes was adopted to a style in which the lyrics were delivered without the aggression that characterized punk rock. Serge Gainsbourg comes to mind, too, although this may cause a bit of an anachronistic issue for my theory, come to think of it. Anyway, like with Gainsbourg or The Smiths, with Cameron the threat–the anarchy, if you please–is not in the voice, but in the directness of the words, the indifference to their reception.

Oxy Music is a record that challenges. Not in the sense that it's aspiring to be clever, nor in the sense that it aspires to be something comparably full-of-shit to clever. It is a thinking person's record, however, in as much as it's long on questions and short on answers (hence: plenty to think about).

The ongoing pandemic shaped this record as far as how it was made. Yet–in my view: thankfully–it resists most any temptation to incorporate said pandemic into marketable content. There is a reference to "this vaccine" on the track Sara Jo–wherein Cameron asks "Who told my brother that his kids are gonna die from this vaccine?"–and that's about the end of it. I doubt Alex Cameron is calling into question the decisions of any European health officials that have acted recently upon concerns about the development of myocarditis in specific demographics among the recipients of the Moderna vaccine, not in the least because the recording predates any new developments in that very esoteric area. And while I suppose vaccine hesitancy very well might be a point of exasperation for a performer in the music industry, which has been ... well ... seriously fucked up by lockdowns, rather than as a rhetorical expression of Cameron's personal convictions regarding all of that, he says that this line is more about the workings of information in this, the most recent version of society we all have found ourselves in, wherein information is now available at such a discount that anyone and everyone can afford their own special reality, complete with special-customized facts.

"Sara Jo" doesn't make the only reference to the social distancing in the new parallel universes. On "Best Life", Cameron sings of the feelings of insecurity, the state isolation–besides, ultimately, that of addiction–brought about by life online in those that would search for meaning and affirmation within the realm of social media. In this instance as well, Cameron is wise enough to neither condemn nor celebrate. He simply says what is, wise enough to respect the mysteries.

Speaking to Cameron, I get the sense that he is well-aware of the potential dangers of having an audience, this day in age. All the same, Cameron does not altogether shy away from topics that might be controversial, at the risk of half the world hating him overnight. For him it may be only a question of which controversy and which half. Take "Cancel Culture"–perhaps the most challenging track on the record.

Looking at the track list, you may notice the title and ask, What is this one going to be about?–and no, it isn't a bring-back-the-shitty-men protest song, so no one jump to any conclusions.

Cameron is patient enough to explain it to me. It is a song about cultural appropriation. Basically: If you've taken something from another culture and you're borrowed it without some permission or some other pass, not understanding the significance of what it is that you've borrowed or how it came to be, then you've used it in such a way that it is demeaning to the source. You may even have committed the ultimate sin of demeaning the value of it for the people that you've stolen it from (like, say, when Pat Boone covered Little Richard). Cameron says this is the sort of thing that ought to have been avoided:

"I said, ´If you do that, if you have so little respect for culture, then you may as well just cancel culture.´"

"As in not have culture anymore? Just say, Fuck it, culture's over because you guys have ruined it for everyone."

Worth noting here is that "Cancel Culture" is the only track on the album that features any rapping. Also worth noting is that Alex Cameron isn't the one rapping. That was done by Lloyd Vines, whom Cameron came to collaborate with after the two crossed paths in a bodega in New York City.

"Yeah, I liked his vibe," Cameron says. "He liked our vibe."

And the rest is history.

Vines was one of the featured vocal collaborators on the record, the other being Jason Williamson of Sleaford Mods, whose vocals are featured on the record's title track.

I ask Cameron about what it was like making a record during lockdown. How did that work?

It was an intercontinental effort. The drums were recorded in Finland, by Henri Lindstrom. The guitarist, Lilah Larson, recorded their part from Colorado. The keyboard/piano that wasn't recorded by Cameron also was sent in remotely, by Jess Parsons. Minus the bodega collaboration from Lloyd Vines, and the bass, Justin Nijssen, who were physically present in the studio in New York City, it was all done remotely. I am unclear on where Roy Malloy and Chris Pitsiokos (saxophones) were, and Jackie McLean (vocals) for that matter, when they recorded their parts. Just rest assured that there were never more than 4 people in a room at any given time and know that the mix is outstanding. Cameron, Nijssen, and Larson produced the album, with the help of Mount Kimbie's Kai Campos, who is credited with the mix.

And it's about here that we discover an overarching equanimity. The same technology that creates the subtle pangs of despair and alienation on the opening track, "Best Life,” is the very same technology that allowed for the creation of the track and the entire record in spite of ... the end of the world as we had known it.

What is the moral of the story? Take the good with the bad?

Maybe there is hope in this, that despite the difficulties presented by the worst years of more or less everybody's life, a record was made. And beyond that, it is a record that shines. And not to diminish what has been said here about Cameron's worth as a singer and lyricist, in the interest of giving credit where credit is due, it's Cameron's good luck that he has behind him what is essentially a perfect set of musicians, who are up to the task of backing him up. The one compliments the other well. Cameron suits them, and likewise. In any event, they know their business. They are all business. There's no business like laughing in the face of death. And so you have Oxy Music.

On the eponymously titled final song of her debut album Land of No Junction, Irish singer-songwriter and musician Aoife Nessa Frances sings, “Take me to the land of no junction/Before it fades away/Where the roads can never cross/But go their own way.” It is this search that lies at the heart of her music, recalling journeys towards an ever shifting centre, where maps are constantly being rewritten. Pitchfork said of the album, “Her voice shines like a headlight in fog, luminous and ambiguous in equal measure."

Aoife grew up swimming in the Irish Sea on the southern coast of Dublin, and the ocean’s shifting sense of loss and discovery is a constant presence in her songwriting. She started playing gigs when she was 15, accompanying her flamenco teacher to small venues in Dublin. She played bass in the Nina Hynes band and the Cian Nugent band, and wrote and played in the Dublin band Princess.